A Catholic Bible is a Bible published in accordance with the prescriptions of the Catholic canon law. The Catholic Public Domain Bible of 2009 includes books of the Old and New Testament and 7 books called Deuterocanonicals (Tobit, Judith, 1 and 2 Maccabees, Wisdom, Sirach, Baruch, parts of Esther and parts of Daniel) excluded by Protestant Bibles. 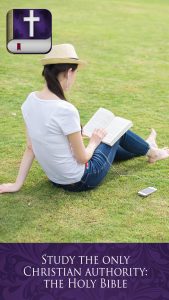 The Roman Catholic Church is the largest Christian Church with more than a billion members worldwide.

The word Catholic comes from the Greek adjective καθολικός (katholikos), meaning “universal”. It’s the original and first Christian Church. It has begin with the teachings of Jesus Christ who lived in the 1st century A.D.

Catholics follow the teachings of Jesus Christ transmitted through the Old and the New Testament.